Get behind the scenes with Mike as he takes you along the journey of his flight leg by leg, starting with some of his thoughts regarding the planning and prep work that lead to this incredible flight. 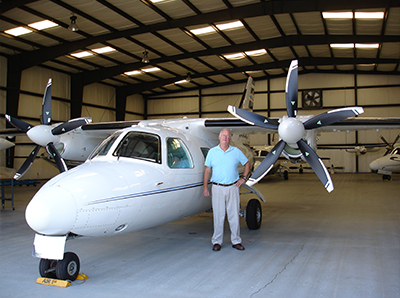 In looking back at my first around-the-world flight, I’m still amazed at how smoothly the trip went, considering all the things that could potentially go very wrong flying into 18 different countries. Thanks to the great reliability of the MU-2, and on this occasion, N50ET, I did not have to deal with mechanical issues, and I could focus on the other aspects of international flying such as communicating with foreign controllers, navigating tricky airspaces, seasonal weather patterns, etc.

I think we take this reliability for granted sometimes with the MU-2—a fact that caught my attention, when several months after my flight, Mike Collins (AOPA photographer documenting the flight) passed along an email to me from a pilot who made a trip around the globe in the 70s in a King Air 90. In the year and a half long flight that combined business with pleasure, the aircraft experienced two engine failures, necessitating a complete engine overhaul in order to fly back to the US.

A year prior to the trip, I began tracking performance figures base on N50ET based altitude, temperature and given indicated and true air speeds relative to fuel burn. Those numbers were compiled to determine the best average range based on head or tailwind components, allowing me to select on my longer legs (based on the weather conditions) the ideal speeds to fly. I worked very closely with BaseOps and was able to give them performance numbers that they loaded into their computer in order to provide accurate flight planning information for the trip.

For months on end, I would sit at home in the evenings plugging in different routes into the Great Circle Mapper on my iPad and planning my route according to my desired stops, the aircraft range, and potential fuel stops. This tool provided a great assistance as it would allow me to map out distances between the stops and allow me to make modifications once I took into consideration Airports of Entry, airport operating parameters, and just as importantly political sensitivities. Luckily winning a free 12-month International subscription to AC-U-KWIK—an online database of worldwide airport and handler information—at the Schedulers conference in San Antonio, made researching international airports a breeze. I also spent a good deal of time on Google Maps in search of airports within the range of N50ET. I had really hoped to see the Pyramids in Luxor, Egypt, but the civil and political unrest from earlier in the year did not improve. I also desired to make a couple stops in Western Australia including Perth, as part of my original flight plan, but the extra miles and steep User Fees had me selecting an alternate route. 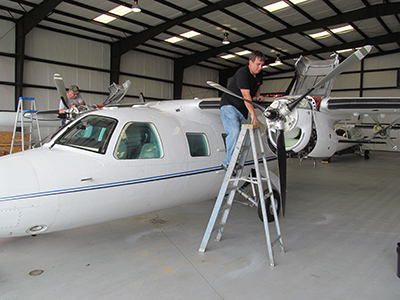 The STC for the 5-bladed MT-Propellers was approved in just under a month prior to the flight. I had them installed as soon as I could, knowing that I still needed some flight time and thus assurance that there would be no performance degradation with the MTs that would make my performance numbers invalid. I was pleasantly surprised that I had an extensive fuel savings on the climb, and my cruise speed was the same, so I was actually burning less fuel per leg. (photo left: Hartzells off!)

The time and effort put forth by employees from Air 1st Aviation Companies, Air 1st, Inc., Carolina Turbine Support, BaseOps, and World Fuel made all the difference in the success of the trip. However, I am especially grateful for the support and encouragement from my wife Anne. Without that, there would have been no trip. On a flight the other day, I picked up the Delorme InReach communicator, which I had bought primarily for the around-the-world trip, and had fond memories looking back at the encouraging texts Anne had sent at various points along the way.

The details of the trip were put together with a realistic schedule for my arrival into Nagoya on the 13th of September, 2013. I did not ask or expect any support or hospitality from anyone due to the fact that the flight was planned and executed as my own personal trip. I was later pleasantly surprised by some of the support I did receive, which will be mentioned in a later article.